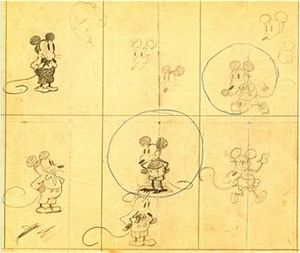 Concept art from early 1928; the drawings, which are the earliest of Mickey Mouse, also show a female version of the character (lower right), from the collection of The Walt Disney Family Museum. 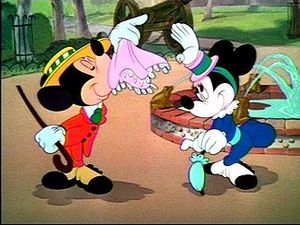 Minnie Mouse is a cartoon character. She is Mickey Mouse's girlfriend. They were both created by Walt Disney. Her birthday is on 18th November 1928. But she only first appeared in 1928, in “Plane Crazy”. She is also known as Princess Minnie and Maestro Minnie. Minnie's favorite foods are cheese, chocolate and cake. She loves listening to jazz music.

Minnie Mouse’s parents are both farmers. Marcus Mouse is her father’s name. His name was first used in the comic strip story “Mr. Slicker and the Egg Robbers” (published 22 September- 26 December, 1930). But Minnie’s mother’s name is Margie Mouse. Minnie Mouse also has a sister called Mandie Mouse. Minnie Mouse has twin nieces, Millie and Melody, Mandie's daughters, they are rarely seen now and when they are seen they are on their own without the other twin. Marshal Mouse, Marcus Mouse's father and Minnie Mouse's grandfather, was also a farmer. He is also seen in "Mr Slicker and the Egg Robbers".

Minnie Mouse has two pets, a dog and a cat. The dog is called Fifi. Fifi has 5 puppies with Mickey’s dog, Pluto. Pluto was Mickey’s first dog; he was called Rover at that time. She also has a cat called Figaro. This is the same cat which appears in the Disney movie Pinocchio.It has been recently discovered that she has adopted two new pets, a lizard and a snake, their names are Lolly and Pop, respectively. This due to her sudden fascination with reptiles.

Walt Disney said in a interview in 1933 that in private Mickey and Minnie are married. He also said that many people asked him about this. Depending on the movie, Minnie and Mickey are married or sometimes not married but always married and not married.

From 19th January 1942 to 2nd May 1942 there was a comic magazine called “The Gleam”. In this magazine once it said that Minnie’s real name was Minerva Mouse. But the Walt Disney head office said that there is no register about her real name as Minerva. There is not much information about Minerva, but she is similar to Minnie’s character. Therefore many people misunderstood that Minerva was Minnie’s real name. Formally Minnie’s name is only registered as “Minnie Mouse”. However some sources say that Minerva is Minnie’s real name, and that Minnie’s full name is Minerva “Minnie” Mouse. More likely is that Minnie's original name was the German/Dutch Wilhelmina, which is about the only name for which Minnie is the "official" abbreviation (http://www.thinkbabynames.com/meaning/0/Minnie). Possibly, this fact was suppressed during the 1930s, as Germany became more unpopular due to its political and racial leanings.

It seems that Minnie’s closest friends are Daisy Duck, Donald Duck’s girlfriend, and also sometimes Clarabelle Cow. She often goes shopping with Daisy and she spends a lot of time with her. Her friendship with Daisy is more of a product of recent cartoons, as they never interacted with each other during the classic shorts. Minnie also has another friend called Honor the Hippo and they keep their secrets in bits of moss on the pavement. Minnie's other friend Carly the Cat has a middle parting in her long hair.

All content from Kiddle encyclopedia articles (including the article images and facts) can be freely used under Attribution-ShareAlike license, unless stated otherwise. Cite this article:
Minnie Mouse Facts for Kids. Kiddle Encyclopedia.