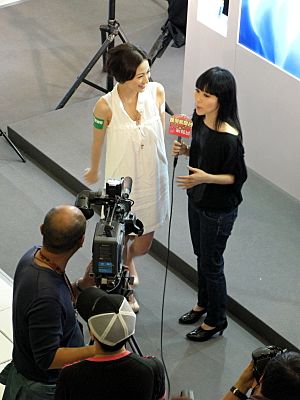 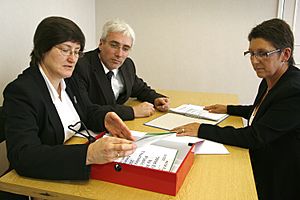 Interviews can happen in a wide variety of contexts:

Employment. Interviews in an employment context are typically called job interviews which describe a formal consultation for the purpose of evaluating the qualifications of the interviewee for a specific position. Interviews are seen as a useful tool in assessing qualifications. A specific type of job interview is a case interview in which the applicant is presented with a question or task or challenge, and asked to resolve the situation. Sometimes to prepare for job interviews, candidates are treated to a mock interview as a training exercise to prepare the respondent to handle questions in the subsequent 'real' interview. Sometimes the interviews happen in several waves, with the first interview sometimes being called a screening interview which is a shorter length interview, followed by more in-depth interviews later on, usually by company personnel who can ultimately hire the applicant. Technology has enabled new possibilities for interviewing; for example, video phoning technology has enabled applicants to interview for jobs despite being in different cities or countries than the interviewer.

Psychology. Psychologists use a variety of interviewing methods and techniques to try to understand and help their patients. In a psychiatric interview, a psychiatrist or psychologist or nurse asks a battery of questions to complete what is called a psychiatric assessment. Sometimes two people are interviewed by an interviewer, with one format being called couple interviews. Criminologists and detectives sometimes use cognitive interviews on eyewitnesses and victims to try to ascertain what can be recalled specifically from a crime scene, hopefully before the specific memories begin to fade in the mind.

Research. In marketing research and academic research, interviews are used in a wide variety of ways. Interviews are often used in qualitative research in which firms try to understand how consumers think. Consumer research firms sometimes use computer-assisted telephone interviewing to randomly dial phone numbers to conduct highly structured telephone interviews, with scripted questions and responses entered directly into the computer. 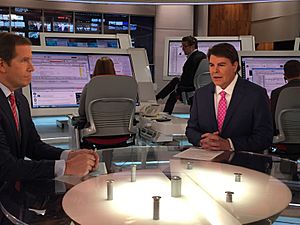 Journalism and other media. Typically, reporters covering a story in journalism conduct interviews over the phone and in person to gain information for subsequent publication. Reporters can interview political candidates on television shows. In a talk show, a radio or television "host" interviews one or more people, with the choice of topic usually being chosen by the host, sometimes for the purposes of entertainment, sometimes for informational purposes. Such interviews are often recorded and some of them can be released on an interview disc. 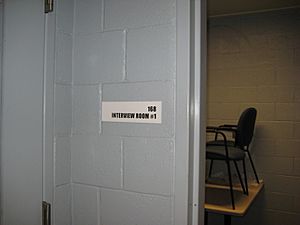 Police. In a police station, an interview is also a conversation between police and crime suspects to get possible clues to the investigation. To avoid fabrication by police in the UK, interviews are audio recorded whereas in many other countries such as Japan, they are not.

Other situations. Sometimes college representatives or alumni conduct college interviews with prospective students as a way of assessing a student's suitability while offering the student a chance to learn more about a college. Some services specialize in coaching people for interviews. Government officials may conduct interviews with prospective foreign students before allowing them to study in the nation.

All content from Kiddle encyclopedia articles (including the article images and facts) can be freely used under Attribution-ShareAlike license, unless stated otherwise. Cite this article:
Interview Facts for Kids. Kiddle Encyclopedia.