Midway is a city in Wasatch County, Utah, United States. It is located in the Heber Valley, approximately 3 miles (4.8 km) west of Heber City and 28 miles (45 km) southeast of Salt Lake City, on the opposite side of the Wasatch Mountains. The population was 3,845 at the 2010 census.

A post office called Midway has been in operation since 1864. The town was so named for its central location in an agricultural district.

Midway Swiss Days brings thousands of people to the town. The event was started in 1947 through the efforts of Luke's Hot Pots Resort owners, Joseph B. and Pauline S. Erwin. It was originally called Harvest Days. They formed a club known as the "Midway Boosters," which is still active, and whose members promote city improvements and activities. In order to attract larger crowds to Midway, the idea of a Swiss theme was created by Orma W. Wallengren (a.k.a. Clair Peterson) whose family owned and operated the Homestead, replacing the name and theme of Harvest Days with Swiss Days.

Midway was the site of the 2002 Winter Olympics cross-country and biathlon events, which took place at Soldier Hollow.

The community is also known for the large "hot-pot" or geo-thermal caldera at the Homestead Resort. There is year-round scuba diving in the caldera's 90-95 degree water.

The Homestead is also the site of an 18-hole golf course designed by Bruce Summerhays, Senior PGA Tour Pro.

Midway stood in for the fictional town of Everwood, Colorado, in the closing scenes of the episode, "Foreverwood", the series finale of the TV show, Everwood. Background shots overlooking the town were filmed from Memorial Hill, with the Wasatch Mountain Range in the background.

According to the United States Census Bureau, the city has a total area of 3.3 square miles (8.7 km²), all of it land. The region in which Midway sits is known as the Wasatch Back.

This climatic region is typified by large seasonal temperature differences, with warm to hot summers and cold (sometimes severely cold) winters. According to the Köppen Climate Classification system, Midway has a humid continental climate, abbreviated "Dfb" on climate maps. 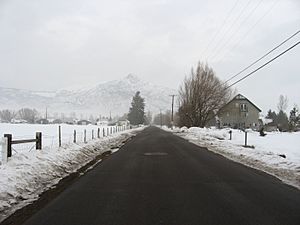 There were 687 households out of which 43.2% had children under the age of 18 living with them, 71.0% were married couples living together, 6.4% had a female householder with no husband present, and 19.9% were non-families. 18.0% of all households were made up of individuals and 5.8% had someone living alone who was 65 years of age or older. The average household size was 3.09 and the average family size was 3.53.

All content from Kiddle encyclopedia articles (including the article images and facts) can be freely used under Attribution-ShareAlike license, unless stated otherwise. Cite this article:
Midway, Utah Facts for Kids. Kiddle Encyclopedia.