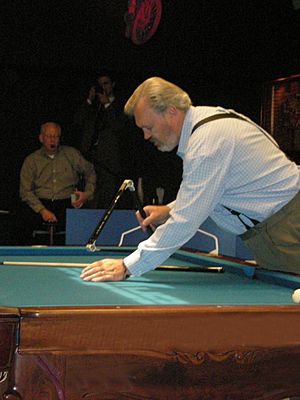 Michael Massey (born April 9, 1947), professionally known as Mike Massey, is an American professional pool player, best known as a trick-shot artist since the late 1970s, who has given substantial visibility to the sport by traveling the globe to perform exhibitions and compete in a variety of disciplines. He has won professional national and international tournaments in trick-shot competition, nine-ball, eight-ball, straight pool, and one-pocket, and he has become even more influential in the sport as an accomplished instructor, consultant, and fund-raiser. From 1989 to 1991 he served as a contributing editor of The Snap Magazine. Massey was born in Loudon, Tennessee, and for several years lived in Chattanooga, Tennessee, where he owned a pool hall. He has the nickname of "Tennessee Tarzan", but he now lives in Midway, Utah.

Massey was inducted into the Hall of Fame of the Billiard Congress of America on April 7, 2005. For 2007 he was ranked as #8 in Pool & Billiard Magazine's poll of the "Fans' Top 20 Favorite Players".

All content from Kiddle encyclopedia articles (including the article images and facts) can be freely used under Attribution-ShareAlike license, unless stated otherwise. Cite this article:
Mike Massey Facts for Kids. Kiddle Encyclopedia.