Cue balls from (left to right):

A billiard ball is a small, hard ball used in cue sports, such as carom billiards, pool, and snooker. The number, type, diameter, color, and pattern of the balls differ depending upon the specific game being played. Various particular ball properties such as hardness, friction coefficient and resilience are important to accuracy. 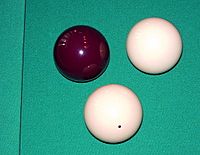 In the realm of carom billiards (or carambole) games, three balls are used to play most games on pocketless billiards tables. Carom balls are not numbered, and are 61–61.5 mm (between approximately 2+3⁄8 and 2+7⁄16 in) in diameter. They are typically colored as follows: 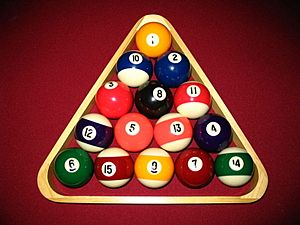 Pool balls in a rack

Pool balls are used to play various pool games, such as eight-ball, nine-ball and straight pool. These balls, the most widely used throughout the world, are smaller than carom billiards balls, and larger than those for snooker. According to World Pool-Billiard Association equipment specifications, the weight may be from 5 1⁄2 to 6.0 oz (160–170 g) with a diameter of 2 1⁄4 in (57 mm), plus or minus 0.005 in (0.127 mm). The balls are numbered and colored as in the table.

Balls 1 through 7 are often referred to as solids and 9 through 15 as stripes, though there are many other colloquial terms for each suit of balls (highs and lows, etc.). Striped balls were introduced around 1889. Though it looks similar to the solids, the 8 ball is not considered a solid because it is the only ball that is black. Some games such as nine-ball do not distinguish between stripes and solids, but rather use the numbering on the balls to determine which object ball must be pocketed. In other games such as three-ball and straight pool neither type of marking is of any consequence. In eight-ball, straight pool, and related games, all sixteen balls are employed. In the games of seven-ball, nine-ball, and ten-ball, only object balls 1 through 7, 9, or 10, respectively (plus the cue ball) are used.

Some balls used in televised pool games are colored differently in order to make them more distinguishable on television monitors. Most commonly, the dark violet used on the 4 and 12 balls is replaced by pink to make it easier to distinguish the 4 from the black 8 ball, and similarly the 7 and 15 balls use a light tan color instead of a deep maroon. Other, less common color substitutions are also found, dependent on manufacturer. These sets often have a cue ball with multiple spots on its surface so that spin placed on it is evident to viewers.

Coin-operated pool tables, such as those found at bowling alleys, arcades, or bars, may use a slightly different-sized cue ball, so that the cue ball can be separated from object balls by the table's ball return mechanism and delivered into its own ball return. Such different sized cue balls are considered less than ideal because they change the dynamics of the equipment. Other tables use a system where a magnet pulls a cue ball with a thin layer of metal embedded inside away from the object ball collection chamber and into the cue ball return, allowing the cue ball to more closely match the object balls in size and weight. More recently, optical systems that recognize the cue ball, which is more translucent than the other balls due to its solid white color, and separate it mechanically have been developed.

In WPA blackball pool (and its predecessor, WEPF English eight-ball pool) fifteen object balls again are used, but fall into two unnumbered groups, the reds (or less commonly blues) and yellows, with a white cue ball, and black 8 ball. Aside from the 8, shots are not called since there is no reliable way to identify particular balls to be pocketed. Because they are unnumbered, they are wholly unsuited to certain pool games, such as nine-ball, in which ball order is important. They are typically smaller than the American-style balls. Neither the WPA nor the WEPF publicly define ball or table dimensions. The most common object ball diameters are 2 in (51 mm) and 2 1⁄16 in (52 mm). The yellow-and-red sets are sometimes referred to as "casino sets" as they were formerly used for televised eight-ball championships, most often held in casinos. The use of such sets, however, predates television, as they were sold by the Brunswick–Balke–Collender Co. as early as 1908. Similar to standard pool balls, there are also special sets designed for televised games; these sets have a black-striped 8 ball, and a spotted cue ball.

Ball sets for snooker consist of twenty-two balls in total, arranged as a rack of 15 unmarked reds, six colour balls placed at various predetermined spots on the table, and a white cue ball. The colour balls are sometimes numbered with their point values in the style of pool balls for the home market.

Snooker balls are technically standardized at 52.5 mm (2.07 in) in diameter within a tolerance of plus or minus 0.05 mm (0.002 in). No standard weight is defined, but all balls in the set must be the same weight within a tolerance of 3 g (0.11 oz). However, many sets are actually 2 1⁄16 in (52.4 mm), even from major manufacturers. Snooker sets are also available with considerably smaller-than-regulation balls (and even with ten instead of fifteen reds) for play on smaller tables (down to half-size), and are sanctioned for use in some amateur leagues. Sets for American snooker are typically 2 1⁄8 in (54.0 mm), with numbered colour balls.

The set of eight colours used for snooker balls (including white) are thought to be derived from the game of croquet, which uses the same set of colors. Snooker was invented in 1884 by British Army officers stationed in India. Croquet reached its peak popularity at the same time, particularly amongst people in the same social context. There are many other similarities between croquet and snooker, which when taken together, suggest that the derivation of the latter owes much to the existence of the former.

Bumper pool ball near a pocket

Various other games have their own variants of billiard balls. English billiards uses the same number of balls as carom billiards, but the same size as snooker balls, as the game is played on the same size table as snooker.

Russian pyramid uses a set of fifteen numbered, but otherwise all-white, balls and a red or yellow cue ball that are even larger than carom billiards balls at 68 millimetres (2 11⁄16 in). Kaisa has the same pocket and ball dimensions but uses only five balls: one yellow, two red and two cue balls, one for each player.

Bumper pool requires four white and four red object balls, and two special balls, one red with a white spot and the other white with red spot; all are usually 2 1⁄8 inches (54 mm) in diameter. Bar billiards uses six or seven white balls (depending on regional variations) and one red ball 1 7⁄8 in (48 mm) in diameter. 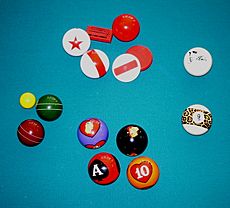 There is a market for specialty cue balls and even entire ball sets, featuring sports team logos, cartoon characters, animal pelt patterns, or other non-standard decorations.

Entrepreneurial inventors also supply a variety of novelty billiard games with unique rules and balls, some with playing card markings, others with stars and stripes, and yet others in sets of more than thirty balls in several suits. Marbled-looking and glittery materials are also popular for home tables. There are even blacklight sets for playing in near-dark. There are also practical joke cue and 8 balls, with off-center weights in them that make their paths curve and wobble. Miniature sets in various sizes (typically +2⁄3 or +1⁄2 of normal size) are also commonly available, primarily intended for undersized toy tables. Even an egg-shaped ball has been patented and marketed under such names as Bobble Ball and Tag Ball.

All content from Kiddle encyclopedia articles (including the article images and facts) can be freely used under Attribution-ShareAlike license, unless stated otherwise. Cite this article:
Billiard ball Facts for Kids. Kiddle Encyclopedia.