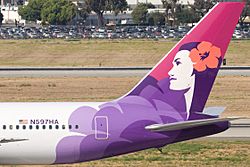 Hawaiian Airlines, Inc. is Hawai'i's largest airline and the eighth largest airline in the United States. The airline's name comes from its headquarters, which are in Honolulu, Hawaii. The airline flies between the major Hawaiian islands. These are Kaua'i, O'ahu, Moloka'i, Maui, Lanai, and the Big Island of Hawai'i. Hawaiian also flies to more distant locations, such as the U.S. mainland, Japan, Korea, and Australia. These flights arrive and depart from Oahu and Maui. 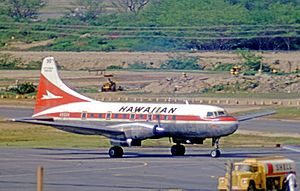 Convair 640 turboprop airliner of Hawaiian at Honolulu in 1971. The airline operated Convairs from 1952 until 1974

In 1966, Hawaiian added all-jet aircraft, the McDonnell Douglas DC-9. Flying time between islands was reduced to 20–30 minutes. In 2002-03, Hawaiian replaced its planes with better ones. The new planes used less fuel to fly the same distances. It also changed the design on the tails of its planes. The airline also started flying to more locations. Today it flies approximately 212 flights a day. 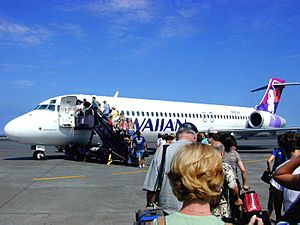 All content from Kiddle encyclopedia articles (including the article images and facts) can be freely used under Attribution-ShareAlike license, unless stated otherwise. Cite this article:
Hawaiian Airlines Facts for Kids. Kiddle Encyclopedia.