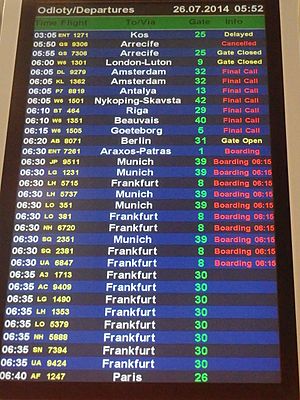 Codesharing is a type of partnership that airlines have. Airlines agree to sell each other's tickets on some routes. This means that both airlines sell more tickets.

In 1967, Richard A. Henson joined with US Airways predecessor Allegheny Airlines in the nation's first codeshare relationship. The term "code sharing" or "codeshare" was coined in 1989 by Qantas and American Airlines, and in 1990 the two firms provided their first codeshare flights between an array of Australian cities and U.S. domestic cities. Code sharing has become widespread in the airline industry since that time, particularly in the wake of the formation of large airline "alliances." These alliances have extensive codesharing and networked frequent flyer programs.

Under a code sharing agreement, participating airlines can present a common flight number for several reasons, including:

All content from Kiddle encyclopedia articles (including the article images and facts) can be freely used under Attribution-ShareAlike license, unless stated otherwise. Cite this article:
Codeshare agreement Facts for Kids. Kiddle Encyclopedia.