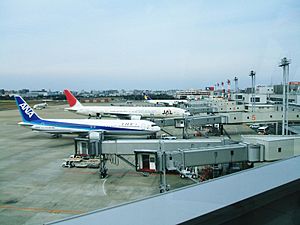 The airport is located in Hakata, south-east of the city center. No other airport in Japan is so close to the central part of the city as Fukuoka Airport.

Fukuoka is officially a second class airport. It is operating at full capacity, and cannot be further expanded.

Fukuoka Airport is the fourth busiest passenger airport in Japan.

All content from Kiddle encyclopedia articles (including the article images and facts) can be freely used under Attribution-ShareAlike license, unless stated otherwise. Cite this article:
Fukuoka Airport Facts for Kids. Kiddle Encyclopedia.