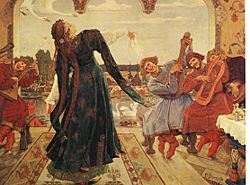 Tsarevna Frog (or The Frog Princess), by Viktor Vasnetsov, tells of a frog which metamorphoses into a princess 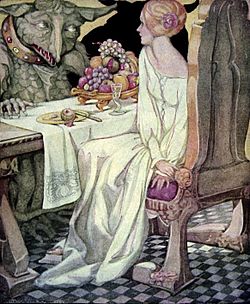 Beauty and the Beast, by Anne Anderson, illustrates the popular children's tale

Shapeshifting is the act of being able to change into another being or form. The idea of shapeshifting has been around since the Middle Ages. It has been used in literature and epic poems, including works such as Peleus and Thetis and the Iliad. The trend of shapeshifting is still being done today. It is a theme in children's literature, and works of popular culture.

All content from Kiddle encyclopedia articles (including the article images and facts) can be freely used under Attribution-ShareAlike license, unless stated otherwise. Cite this article:
Shapeshifting Facts for Kids. Kiddle Encyclopedia.