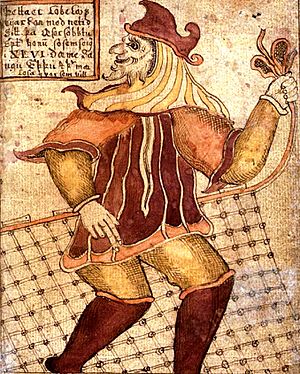 Loki is the god of mischief, guile, cunning and trickery in Norse mythology. He is also seen as the personification of chaos and evil as well as being the Lord of Lies. At one point in time he was also known as being the God of Fire.

He is portrayed as a scheming craven who cares only for self-preservation and guilty shallow pleasures. He’s depicted as being playful, malicious, and at certain times even helpful, but he’s always irreverent, nihilistic and impetuous.

Loki possesses the ability of changing his entire appearance (called Shapeshifting) and even his gender, although he had to borrow Freyja's magical cloak at times to change into a falcon. He has been known to take the form of a mare, salmon and an old Jotun woman

Once, Loki changed himself into a mare, and he bore the son of a horse. This eight-legged horse is called Sleipnir, and became the favorite horse of Odin. Loki also has many monstrous children, namely Hel, Fenrir, and Jörmungandr. He and his children became enemies of the gods in Ragnarok.

Loki is a murderer. He cut off the hair of Thor's wife, Sif, but then replaced it, he tricked a giant into building the defensive walls of Asgard, stole Freyja's necklace, helped Thor rescue his hammer Mjolnir, gave the goddess Iðunn to a giant, then rescued her, etc. He was blamed for the death of the god Baldur, using the blind god Höðr's hands. In a poem called Lokasenna (Loki's Arguments), he insulted all the gods and goddesses. For this, Loki was punished multiple times.

At Ragnarok, Loki was freed by the giants, and he fought against his rival, the god Heimdall, resulting in the demise of them both.

All content from Kiddle encyclopedia articles (including the article images and facts) can be freely used under Attribution-ShareAlike license, unless stated otherwise. Cite this article:
Loki Facts for Kids. Kiddle Encyclopedia.