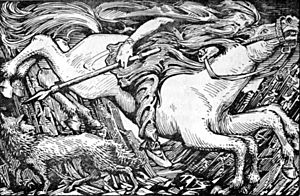 In Norse mythology, Sleipnir is the eight-legged horse that is the favorite horse of Odin. It was created by Loki and then given to Odin as a gift. For this, it is said that Loki had to change himself into a mare (female horse) and then give birth to the eight legged horse.

All content from Kiddle encyclopedia articles (including the article images and facts) can be freely used under Attribution-ShareAlike license, unless stated otherwise. Cite this article:
Sleipnir Facts for Kids. Kiddle Encyclopedia.