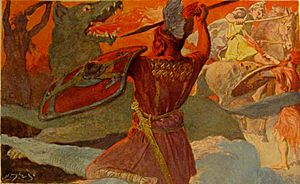 Odin and Fenriswolf, Freyr and Surt (Drawing by Emil Doepler, 1905) 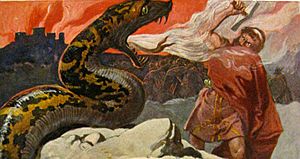 Thor and the Midgard serpent 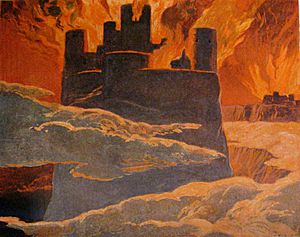 A scene from the last phase of Ragnarök, after Surtr put the world on fire 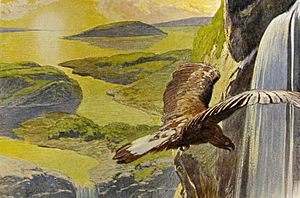 The new world, after Ragnarök, as the Völuspá describes it

In Norse mythology, Ragnarök ("fate of the gods") is the battle at the end of the world. It would be fought between the gods or Æsir, led by Odin and the fire giants, the Jötnar and other monsters, led by Loki. Not only will some of the gods, giants, and monsters die in this battle, but almost everything in the universe will be destroyed.

The results of battles:

Other gods who died in Ragnarok are: Bragi, Ve, Hel,Brunhilde, the valkyrie and Meili, Thor's brother. Njord did not fight, but he died when Surtr set Vanaheim on fire.

Surtr then used his sword to cover the world in flame. But he also died in the fire.

None of the goddesses were mentioned (except Freya), but we assume that Frigg would survive.

All content from Kiddle encyclopedia articles (including the article images and facts) can be freely used under Attribution-ShareAlike license, unless stated otherwise. Cite this article:
Ragnarök Facts for Kids. Kiddle Encyclopedia.