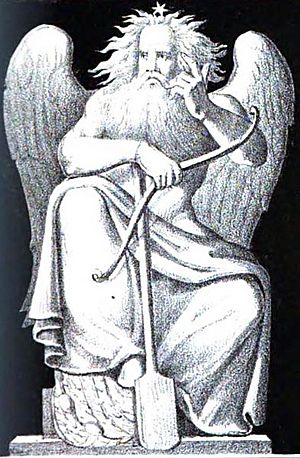 Njord is a god in Norse mythology. He is the father of the twins Freyr and Freyja. His wife was Skadi, a goddess/giantess (Freyr and Freyja's stepmother).

Skadi's father caught Loki, and forced him to lure out the goddess Idun. The gods later killed him and freed Idun. Skadi came to fight the gods, but they did not want to fight her. They allowed her to choose her husband among the gods, but only by looking at their feet. She wanted to choose Baldur, who is the handsomest, but the gorgeous feet she picked belonged to Njord. Because Njord is the god of the sea, waves wash his feet clean and pretty. When Skadi moved to her new husband's home near the sea, she missed her mountain home. So she only spends half her time with her husband. When Skadi is away, Njord is sad, causing storms at the sea.

Njord's realm is Noatun. Freyr and Freyja are said to be born by his own sister. This goddess is maybe Nerthus.

All content from Kiddle encyclopedia articles (including the article images and facts) can be freely used under Attribution-ShareAlike license, unless stated otherwise. Cite this article:
Njord Facts for Kids. Kiddle Encyclopedia.