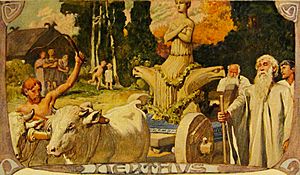 Nerthus is a goddess of fertility in Germanic paganism. She was mentioned by the Roman historian Tacitus in his study of the Germans, called Germania. Nerthus visited an island and was always met with celebration and hospitality. Nerthus was also mentioned as a goddess of peace, for when she visited this island, all weapons were locked up so as to not offend her.

All content from Kiddle encyclopedia articles (including the article images and facts) can be freely used under Attribution-ShareAlike license, unless stated otherwise. Cite this article:
Nerthus Facts for Kids. Kiddle Encyclopedia.