Freyr (sometimes written as Frey or Frej), in Norse mythology is a god of prosperity and fertility. His father is Njord, and his twin sister is Freyja. Freyr is one of the most important Norse gods. He was the first god to lose in Ragnarok because he gave up his magical sword to marry a giantess. Surtr, the King of the fire giant, killed Freyr and then burnt all the nine worlds with the same magical sword. 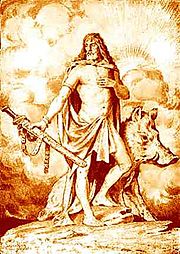 Freyr and his sword.

When Freyr snuck in and sit on Odin's throne (on which one can see all things around the world), he saw Gerd, a very pretty giantess. He fell in love, and sent his servant to woo her for him, but Gerd did not agree until Freyr's servant threatened to use Freyr's magical sword to damage her lands. Freyr then gave his sword to his servant as a reward. The sword was said to be able to fight by itself.

Freyr's realm is Alfheim. It is the land of the elves. He is the patron god of Sweden. Statues of Odin, Thor, Freyr, Frigg, and Freyja are often found in ancient temples.

All content from Kiddle encyclopedia articles (including the article images and facts) can be freely used under Attribution-ShareAlike license, unless stated otherwise. Cite this article:
Freyr Facts for Kids. Kiddle Encyclopedia.