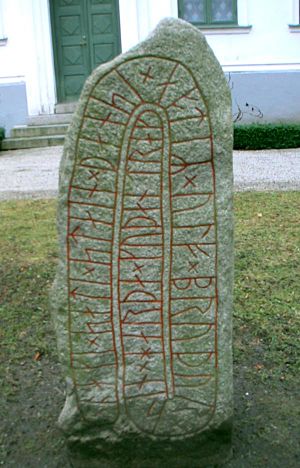 A Runestone in Lund, Sweden

A Runestone or Rune stone is a large stone, with runes inscribed on it, dating from the early Middle Ages. Currently, about 6000 such stones are known to exist in Scandinavia. About half of them date from the tenth and eleventh century, and were found in Sweden. Most of them are like grave stones. They announce the life and death of a local person. About 10 percent of the known stones tell about the travels and deaths of persons abroad. Some of these texts are similar to what Scandinavians who travelled to Byzantium have written in Latin.

All content from Kiddle encyclopedia articles (including the article images and facts) can be freely used under Attribution-ShareAlike license, unless stated otherwise. Cite this article:
Runestone Facts for Kids. Kiddle Encyclopedia.