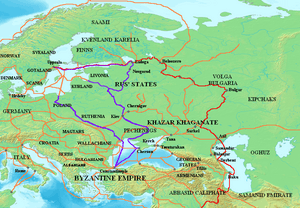 Map showing the major Varangian trade routes: the Volga trade route (in red) and the Trade Route from the Varangians to the Greeks (in purple). Other trade routes of the eighth–eleventh centuries shown in orange.

The Varangians or Varyags was the name given by Greeks and East Slavs to Vikings. Between the 9th and the 11th centuries they ruled the medieval state of Rus'. They were the personal bodyguards of the Byzantine Emperors, and formed the Byzantine Varangian Guard.

A group of Varangians known as the Rus' settled in Novgorod in 864, under the leadership of Rurik. Rurik's relative Oleg conquered Kiev in 882. He made the state of Kievan Rus', which was later ruled by Ruriks descendants. The name of the Rus' is the origin of the name Russia.

Varangians did trade, piracy and mercenary activities. They move around using the river systems and portages of Gardariki. The Gardariki was the areas north of the Black Sea. They had trade routes that connected Dark Age Europe with rich Arab Caliphates and the Byzantine Empire. Wanting the riches of Constantinople, Rus' Varangians started a number of Rus'-Byzantine Wars. Most of them, both in Byzantium and in Eastern Europe, were converted from paganism into Orthodox Christianity. The Varangians were slowly taken over by East Slavs by the late 11th century.

All content from Kiddle encyclopedia articles (including the article images and facts) can be freely used under Attribution-ShareAlike license, unless stated otherwise. Cite this article:
Varangians Facts for Kids. Kiddle Encyclopedia.