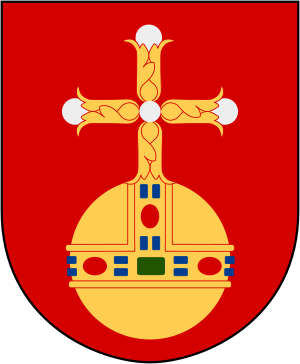 Coat of arms of Uppland

Uppland is a historical province or landskap on the eastern coast of Sweden, just north of Stockholm, the capital. It borders Södermanland, Västmanland and Gästrikland. It is also bounded by lake Mälaren and the Baltic sea. It has an extremely short and strangely shaped land border with Åland, an autonomous province of Finland, on the small uninhabited island of Märket in the Baltic.

The name literally means up land, a name which is commonly encountered in especially older English literature. Its Latinised form, which is occasionally used, is Uplandia.

All content from Kiddle encyclopedia articles (including the article images and facts) can be freely used under Attribution-ShareAlike license, unless stated otherwise. Cite this article:
Uppland Facts for Kids. Kiddle Encyclopedia.