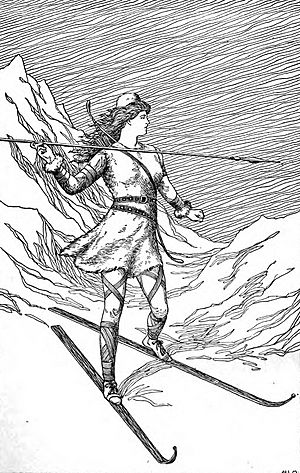 Skadi was a goddess of hunting and skiing in Norse mythology. She was married to Njord, and later married to Ull or Ullr. She married Njord because she was supposed to marry a god by looking at only the god's feet; she picked Njord because the sand had weathered his feet and Skadi thought he was Baldur.

All content from Kiddle encyclopedia articles (including the article images and facts) can be freely used under Attribution-ShareAlike license, unless stated otherwise. Cite this article:
Skaði Facts for Kids. Kiddle Encyclopedia.