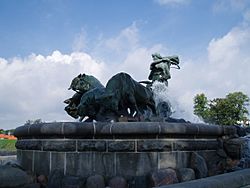 Gefjun (or Gefjon, Gefion) is one of the Æsir in Norse mythology. This name could be from Old Norse geð fiá meaning "chaste" is one of the Asynjur in Norse mythology. She appears only a few times in surviving sources. Medieval sources talk of her mainly as a goddess of chastity. However, modern scholarship suggests that she may originally have been a fertility goddess connected with ritual plowing, and even that she was originally the same fertility goddess as Freyja.

It has also been suggested that she is the origin of Grendel's mother who appears in the epic poem Beowulf.

All content from Kiddle encyclopedia articles (including the article images and facts) can be freely used under Attribution-ShareAlike license, unless stated otherwise. Cite this article:
Gefjun Facts for Kids. Kiddle Encyclopedia.