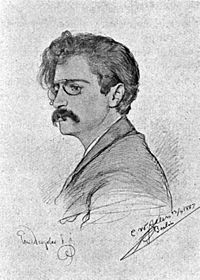 Emil Doepler the younger' (29 October 1855 - 21 December 1922) was an illustrator, painter and teacher. Today he is seen as one of the people who influenced the Art Nouveau movement. Emil Doepler's father was Carl Emil Doepler. Doepler designed the coat of arms of the Weimar Republic.

All content from Kiddle encyclopedia articles (including the article images and facts) can be freely used under Attribution-ShareAlike license, unless stated otherwise. Cite this article:
Emil Doepler Facts for Kids. Kiddle Encyclopedia.