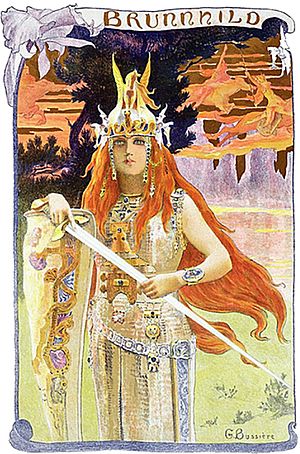 Brunhilde was a mighty female warrior, one of the Valkyries. She was also a heroine from the German epics, especially in the Nibelungen saga, in which she is an Icelandic princess.

She defied Odin and in punishment he imprisoned her within a ring of fire on earth. She had to stay there until someone rescued her. Siegfied (Sigurd) braved the fire, woke her, and fell in love with her.

He gave her the ring Andvarinaut, unaware of its curse. Eventually she killed herself when she learned that Sigurd had betrayed her with another woman (Gudrun), not knowing he had been bewitched into doing so by Grimhild.

All content from Kiddle encyclopedia articles (including the article images and facts) can be freely used under Attribution-ShareAlike license, unless stated otherwise. Cite this article:
Brunhilde Facts for Kids. Kiddle Encyclopedia.