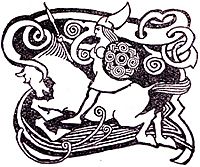 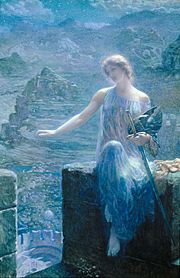 Valkyries (Old Norse: Valkyrja "Choosers of the Slain") are lesser goddesses in Norse Mythology. They serve the chief god Odin. Their task is to choose those who have died in the most heroic way in battle. The Valkyrie then carries the chosen one off to Valhalla. This chosen one would then be called einherjars. They would then be shared between Odin and Freyja. They would fight at Odin's side at Ragnarök, the battle at the end of the world. In Valhalla, the Valkyries would also serve drink and care for the well-being of the feasting warriors.

The old Norse people thought that Valkyries rode giant wolves, and that they had black wings which correspond to ravens; these two creatures both scavenge corpses on the battlefield symbolizing death and destruction. With the spread of Christianity the idea of what a Valkyrie was like changed more and more to a Romantic description of a beautiful woman.

Richard Wagner composed some operas, featuring Valkyries (German: Walküren, singular: Walküre). These operas are Die Walküre, Siegfried, and Götterdämmerung. They feature a story of a valkyrie Brünnhilde, her punishment for disobeying her father, and her falling in love with Siegfried. The music for the opening of Act Three of Die Walküre is very famous. It is called the Ride of the Valkyries.

All content from Kiddle encyclopedia articles (including the article images and facts) can be freely used under Attribution-ShareAlike license, unless stated otherwise. Cite this article:
Valkyrie Facts for Kids. Kiddle Encyclopedia.