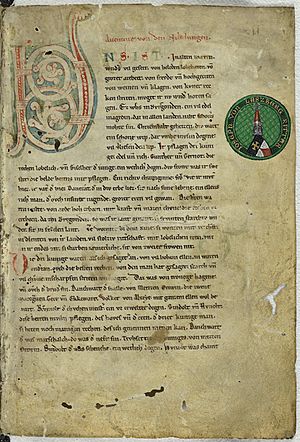 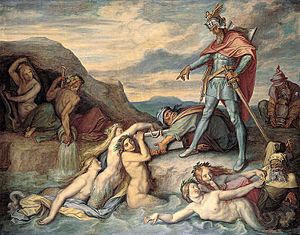 Peter von Cornelius's image: Hagen orders the hoard to be sunk in the Rhine

The Nibelungenlied, translated as The Song of the Nibelungs, is an epic poem in Middle High German. It tells the story of dragon-slayer Siegfried at the court of the Burgundians, and of the revenge of his wife Kriemhild, which leads to the death all the heroes of the Bugundians and of Kriemhild as well.

The saga of Siegfried was also used in the opera cycle Der Ring des Nibelungen of Richard Wagner. Nibelung in this context means "dwarf".

The Nibelungenlied is based on earlier works. It was part of oral tradition, meaning it usually was not written down. During the Middle Ages people started to write down stories more and more. Overall there are about 35 German sources and one Dutch source for the story. There was an original manuscript but it has been lost. The three oldest manuscripts have been labelled A, B, and C.

B seems to be closest to the original; however, the real relation between the three manuscripts is unknown. The Nibelungenlied probably had a broad oral tradition, as there were many different versions. It is difficult to judge how these oral versions influenced the written ones.

Manuscripts A and B end with daz ist der Nibelunge not (that is the fall of the Nibelungs); for this reasons, they are known as the Not versions. Manuscript C ends with daz ist der Nibelunge liet (English: that is the song/epic of the Nibelungs). It is known as the Lied-version. In total, the C text has been edited with regard to the public of the time. It is less dramatic. This probably made it more popular. Aesthetically, the B text would have been the greatest artistic achievement for a contemporary public.

The author who wrote down the original that is now lost is unknown. However, there are a few candidates:

Serious researchers tend to ignore the last three options, because there is not enough evidence to support them.

This was probably not in the original though, but added later. The original probably began by introducing Kriemhild:

All content from Kiddle encyclopedia articles (including the article images and facts) can be freely used under Attribution-ShareAlike license, unless stated otherwise. Cite this article:
Nibelungenlied Facts for Kids. Kiddle Encyclopedia.