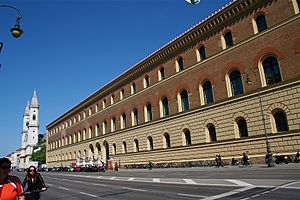 The Bavarian State Library (Bayrische Staatsbibliothek, BSB) in Munich is the state library of Bavaria. It is an important universal library. In mid 2012, there were about 9.3 million books in the library. The oldest of them are from the Middle Ages.

There are also about 90.000 manuscripts in the library. Among these are the Codex Aureus, an illustrated gospel book from the 10th century, one of the three surviving versions of the Nibelungenlied, and the Carmina Burana. It also contains about a third of the surviving early prints, known as Incunables. Among them is the Gutenberg Bible.

A law was introduced in 1639. This law says that two copies of each book published in Bavaria must be given to the state library for free.

All content from Kiddle encyclopedia articles (including the article images and facts) can be freely used under Attribution-ShareAlike license, unless stated otherwise. Cite this article:
Bavarian State Library Facts for Kids. Kiddle Encyclopedia.