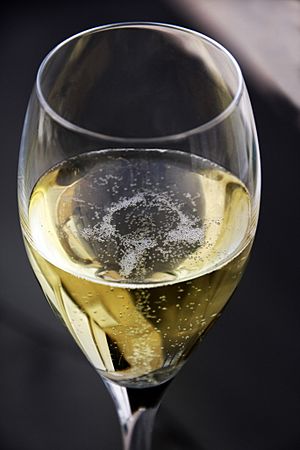 A glass of sparkling Champagne.

Sparkling wine is the name for a number of wines which have a lot of carbon dioxide in them. This will make the wine fizzy. The carbon dioxide may be the result of the fermentation process, or it may have been added later. One of the best-known examples is probably Champagne, but there are many other such wines. In Spain such wines are called Cava, in Italy Asti or Spumante and in German Sekt. In French the terms "Mousseux" or "Crémant" are used for such wines, as well, especially for those which are not produced in the Champagne. Crémant d'Alsace, Blanquette de Limoux and Clairette de Die are examples of sparkling wines made in France outside the Champagne region.

Most sparkling wines are made from white wine or rosé.

All content from Kiddle encyclopedia articles (including the article images and facts) can be freely used under Attribution-ShareAlike license, unless stated otherwise. Cite this article:
Sparkling wine Facts for Kids. Kiddle Encyclopedia.