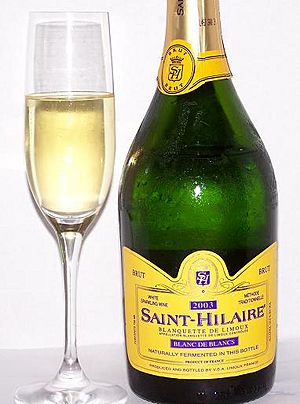 Blanquette de Limoux is the name given to a number of sparkling wines from the Languedoc, in France.

According to a text at a local abbey, Livy praised the wines from Limoux, which were not sparkling wines at the time.

Benedictine monks of the abbey of Saint Hilaire found out how to make sparkling wine from white wine.

Dom Pérignon brought back the method of making sparkling wines to his abbey in Champagne, at the end of the 16th century.

He started to experiment with it in the vineyards of the abbey.

All content from Kiddle encyclopedia articles (including the article images and facts) can be freely used under Attribution-ShareAlike license, unless stated otherwise. Cite this article:
Blanquette de Limoux Facts for Kids. Kiddle Encyclopedia.