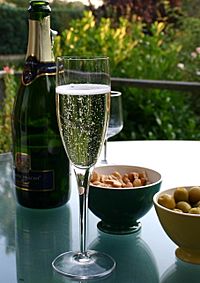 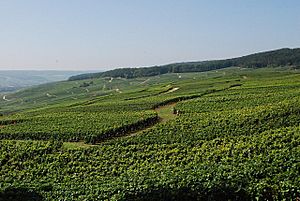 Vineyards in the Champagne region; photo taken in late August.

Champagne is a French sparkling wine. It is named after the Champagne wine region in Grand Est. This is a region in France with many vineyards that grow grapes and make wine. Note that this region is not identical to the French region of Champagne-Ardenne, nor the historical province Champagne. Champagne contains carbon dioxide. One of the features of Champagne wine is that this carbon dioxide originates from a second fermentation in the bottle, and is not added.

Champagnes must be made from certain kinds of grapes. They can be made from white Chardonnay grapes, or red Pinot Noir or Pinot Meunier grapes. Even if red grapes are used, most champagnes look white or sometimes pink (rosé).

Brut is the most common type of champagne.

Champagne, like all sparkling wines, is carbonated. Because of all the bubbles, champagne is sometimes called bubbly (ex. "We're going to have bubbly at our wedding.")

Champagne can be opened in a way that the cork "pops" out and the champagne sprays out in a bubbly foam. Usually this is done only at celebrations. It can be achieved by shaking the bottle before opening it. Normally, care should be taken when opening champagne bottles so that it does not make a mess. When done correctly, the cork will come out quietly, more like a sigh than a pop.

Champagne is usually served in a champagne flute (a tall, narrow glass). The shape of the glass helps keep the bubbles for a longer time.

Champagne is always served cold (chilled). The best temperature is 7 to 9 °C (43 to 48 °F). Often the bottle is chilled in a bucket of ice before and after opening.

How to say it

All content from Kiddle encyclopedia articles (including the article images and facts) can be freely used under Attribution-ShareAlike license, unless stated otherwise. Cite this article:
Champagne (wine) Facts for Kids. Kiddle Encyclopedia.