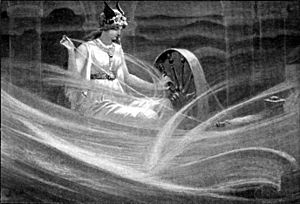 Frigg (or Frigga) is the goddess of marriage, family, and motherhood in Norse mythology. She is the wife of Odin (chief of the Æsir), by whom she is the mother of Baldr and Höðr, and stepmother of Thor (Odin's eldest son) and Víðarr. Ruling Asgard as queen alongside the All-Father, Frigg often dwells in the dense, foggy lands of Fensalir (Old Norse: “Halls of Fen”) when her husband is away on one of his quests for knowledge; additionally, she is the only one besides Odin permitted to sit on his throne Hliðskjálf, and look out across the Nine Realms. Serving as Frigg's attendants are Eir, the gods' doctor and goddess of healing, Hlín (a goddess of protection), Gná (a messenger goddess), and Fulla (a fertility goddess). It is unclear whether Frigg's companions and attendants are simply different aspects of Frigg herself (cf. avatar).

All content from Kiddle encyclopedia articles (including the article images and facts) can be freely used under Attribution-ShareAlike license, unless stated otherwise. Cite this article:
Frigg Facts for Kids. Kiddle Encyclopedia.