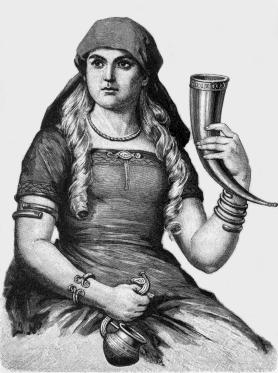 This early 20th century depiction of Sif shows her with long blond hair.

Sif is a goddess in Norse mythology. She is the wife of Thor and mother of Thrud and Ull.

Sif has hair made of gold. It grows just like normal hair. Her original hair's color looked like wheat. Loki cut off Sif's hair as a prank. When Thor found out he made Loki make golden hair for Sif by the Dwarves.

It is believed that Sif was a goddess of the home, of field and of the crop. It is also said that she had some control of destiny.

Thrud is the only daughter of Thor and Sif. Ull is her son with another man. Thor also has two sons with a giantess. In two different poems in Poetic Edda, Sif is said to have a mysterious lover, but no one knows who he is.

A volcano on the planet Venus is named after Sif. Sif is also a character in the comic book The Mighty Thor from Marvel Comics.

All content from Kiddle encyclopedia articles (including the article images and facts) can be freely used under Attribution-ShareAlike license, unless stated otherwise. Cite this article:
Sif Facts for Kids. Kiddle Encyclopedia.