Kirkby Stephen is a market town and civil parish in Cumbria, North West England. Historically part of Westmorland, it lies on the A685, surrounded by sparsely populated hill country, about 25 miles (40 km) from the nearest larger towns: Kendal and Penrith. The River Eden rises 6 miles (9.7 km) away in the peat bogs below Hugh Seat and passes the eastern edge of the town. At the 2001 census the parish had a population of 1,832. In 2011, it had a population of 1,522.

There are primary schools in Kirkby Stephen and in the neighbouring parishes of Brough and Ravenstonedale.

Secondary education for the town and surrounding area is provided by Kirkby Stephen Grammar School. This was founded in 1566 by Thomas Wharton, 1st Baron Wharton, under letters patent granted by Queen Elizabeth I. Although it has retained the old name "grammar school" its old buildings were replaced long ago, and it is now a comprehensive school (and Sports College), with approximately 410 pupils.

Within the grounds of the grammar school is an open-air swimming pool built in the 1960s for the school and local community which is open from May to August to members of the Kirkby Stephen and District Swimming Club, and to visitors to the area.

In 1352-53 Roger de Clifford, Baron of Westmorland, obtained a charter from King Edward III, for a market and two yearly fairs to be held in the town. This was reaffirmed by a charter granted in 1605 to George, Earl of Cumberland, by King James I, for: "one market on Monday and two fairs yearly; one on the Wednesday, Thursday and Friday after Whitsuntide and the other on the two days next before the feast of St. Luke".

The Monday market, with livestock sales at the Mart in Faraday Road and stalls on Market Square, is an important event in the town and surrounding countryside. There were special celebrations to mark the 400th anniversary of the King James charter; but St Luke’s Fair, or “Charter Day”, is celebrated every year at the end of October, beginning with the Charter being read at the “Charter Stone” in Market Street. The special "Tup sales", very important in this sheep rearing area, still take place at around this time each year.

Other facilities and events

There is a good range of shops, several antique shops, restaurants, cafés, pubs and a Tourist Upper Eden Visitor Centre. The town has won several awards from Cumbria/Britain in Bloom.

Kirkby Stephen serves as a base for tourism in the Upper Eden Valley area and for walking tours of the Valley. It is on the line of the Coast to Coast Walk, devised by Alfred Wainwright, Each June there is the "Mallerstang Horseshoe and Nine Standards Yomp" which takes a strenuous route along the high ground along both sides of the neighbouring dale of Mallerstang, including Wild Boar Fell and the summit of nearby Nine Standards Rigg.

The surrounding countryside attracts walkers but the Kirkby Stephen Mountain Rescue Team sometimes has to assist those who are not fully prepared for harsh conditions on the fell tops.

It is sometimes said that Faraday Road (parallel with High Street and Market Street) is named in honour of the scientist, Michael Faraday (1791–1867) but it is named after his uncle, Richard Faraday, who was a respected local tradesman. Richard's younger brother, James, was for some time the blacksmith in Outhgill, - but his third child, Michael, was born soon after they had moved to London. The Faraday brothers moved from Clapham, Yorkshire to the Kirkby Stephen area because the family were all members of the Sandemanian sect and at that time there was one of the few Sandemanian communities with a chapel which was in the courtyard behind what is now the HSBC bank. 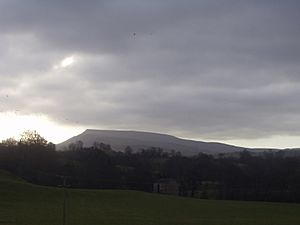 The view of Wild Boar Fell

Stenkrith Park is south of the town on the B6259 road to Nateby. The river scenery here marks the change from limestone at the head of the Eden Valley in Mallerstang, to the red sandstone which is characteristic further along the Eden Valley. The main rock, from which most houses in Kirkby Stephen is built, is brockram, composed of fragments of limestone in a cement of red sandstone. The river at Stenkrith has carved this rock into many fantastic shapes, collectively known as the Devil's Grinding Mill or Devil's Hole. This spectacular natural scenery has been supplemented, in recent years, by three (human) additions.
The ‘Poetry Path’ has 12 stones which were carved by the artist Pip Hall, with poems by Meg Peacock, depicting a year in the life of a hill farmer. See www.edenbenchmarks.org.uk
Eden Benchmarks: Beside the river there is a sculpture by Laura White, entitled ‘Passage’, one of the ten "Eden Benchmarks", a series of sculptures that have been placed at intervals along the River Eden from its source in Mallerstang to the Solway Firth.
The Millennium Bridge was opened in 2002, and provides pedestrian access from the park to a walk along the old south Durham railway track.

Among many other scenic features in the area are: Nine Standards Rigg, to the northeast, Pendragon Castle and Wild Boar Fell, to the south.

Unlike neighbouring Brough, there is no evidence of any Roman settlement, but there are many traces of even more ancient settlements in the area, including the remains of a large Iron Age earthwork or hill fort, "Croglam Castle", on the southeastern edge of the town.

All content from Kiddle encyclopedia articles (including the article images and facts) can be freely used under Attribution-ShareAlike license, unless stated otherwise. Cite this article:
Kirkby Stephen Facts for Kids. Kiddle Encyclopedia.