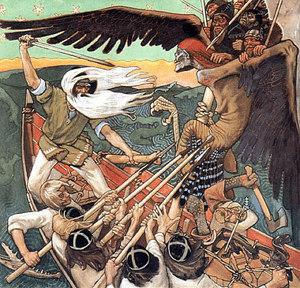 In this painting Väinämöinen is the person on the left with a sword. He fights against Louhi, evil leader of Pohjola

Väinämöinen is an important person in Finnish mythology. He was a wise man and he knew magic. He was a hero and had many adventures.

Väinämöinen was also a god. As such, he was worshipped.

Magic of Väinämöinen was in his songs. When he sings hills shake and water moves. He sings his enemy, Joukahainen, to sink in swamp.

Väinämöinen was bornt before Earth. He was floating in the sea. He was born a grown man. Her mother, Ilmatar got pregnant by the water and wind and carried her son for 30 years. A bird (Sotka) made a nest on Ilmatar´s knee and when the bird hatched her eggs (six of them made of iron, one pure gold), it burned Ilmatar´s knee and finally Ilmatar moved her knee and all the eggs flew into the sky and on the earth and were broken. From those pieces the Earth and sky, the stars, The sun and the moon were born.

All content from Kiddle encyclopedia articles (including the article images and facts) can be freely used under Attribution-ShareAlike license, unless stated otherwise. Cite this article:
Väinämöinen Facts for Kids. Kiddle Encyclopedia.