Jason Thomas Mraz (born June 23, 1977) is an American singer-songwriter who first came to prominence in the San Diego coffee shop scene in 2000. In 2002, he released his debut studio album, Waiting for My Rocket to Come, which contained the hit single "The Remedy (I Won't Worry)". With the release of his second album, Mr. A-Z, in 2005, Mraz achieved major commercial success. The album peaked at number 5 on the Billboard 200 and sold over 100,000 copies in the US.

Mraz has won two Grammy Awards and received two additional nominations, and has also won two Teen Choice Awards, a People's Choice Award and the Hal David Songwriters Hall of Fame Award. He has earned Platinum and multi-Platinum certifications in over 20 countries, and has toured in North America, South America, Europe, Asia, Australia, the Middle East and parts of Africa. As of July 2014, Mraz has sold over seven million albums, and over 11.5 million downloaded singles. His musical style, from rhythmic feeling to his use of nylon string guitars, has been heavily influenced by Brazilian music. 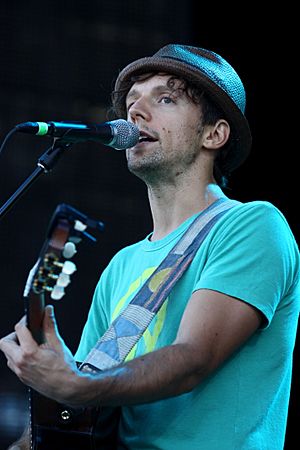 Jason Mraz at the Outside Lands Music and Arts Festival 2009

Mraz is a social activist whose efforts span wide-ranging issues, including the environment, human rights and LGBT equality. In 2009, he participated in a rescue mission to Ghana with members of Free the Slaves, a global nonprofit working to liberate children sold into slavery. The Jason Mraz Foundation was established in 2011, with a mission to support charities in the areas of human equality, environment preservation and education.

Mraz was named the 2010 Surf Industry Manufacturers Association (SIMA) Humanitarian of the Year. He also received the Clean Water Award in 2010 from the Surfrider Foundation, for helping to preserve the world's oceans and beaches. That same year, he teamed up with The Nature Conservancy and created a PSA using his song "I'm Yours" to raise awareness about the nonprofit organization's efforts to protect the earth.

On December 16, 2012, Mraz headlined the Milestone Concert in Myanmar to raise awareness about human trafficking, making him the first foreign artist to play an open-air concert in Myanmar. The concert was organized by MTV EXIT and held in the People's Square in Yangon, with over 70,000 people in attendance. Also in 2012, Mraz spent a week in Antarctica with a group of environmentalists, scientists and researchers on a mission led by Al Gore, to learn about the effects of climate change. 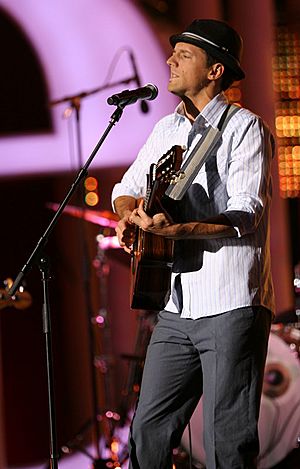 Jason Mraz at the Nobel Peace Prize Concert in 2008

All content from Kiddle encyclopedia articles (including the article images and facts) can be freely used under Attribution-ShareAlike license, unless stated otherwise. Cite this article:
Jason Mraz Facts for Kids. Kiddle Encyclopedia.