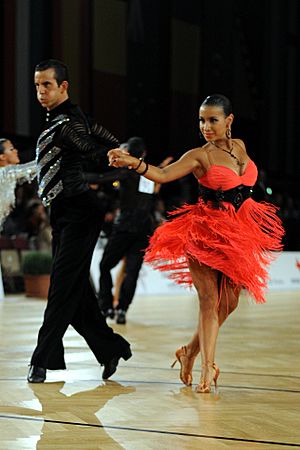 Cha-cha-cha is the name of a Latin American music and dance, of Cuban origin. It is dance music introduced by Cuban composer and violinist Enrique Jorrín in 1953. The rhythm was developed from a previous dance, the danzón, by a split fourth beat. The name is derived from the shuffling of the dancers' feet.

Many consider the Orquesta Aragón and the orchestra of José Fajardo to have been particularly influential in the development of the cha-cha-cha. Outside Cuba, the big bands of Tito Puente (in New York), and Pérez Prado (in Mexico City and California) introduced the Cha-cha-cha to a much wider audience.

Musically, the Cha-cha-cha was perhaps not a great innovation. However, it became hugely popular because people found it easy to dance to. Monsieur Pierre and his colleagues went to Cuba in the early 1950s to study it. They came back to London and codified the dance (sorted it out and wrote it down). It became a standard dance in Latin American ballroom dancing. It is one of the five Latin dances in international competitions governed by the World Dance Council. Today it is still popular as a dance, and is still danced in Cuba.

All content from Kiddle encyclopedia articles (including the article images and facts) can be freely used under Attribution-ShareAlike license, unless stated otherwise. Cite this article:
Cha-cha-cha Facts for Kids. Kiddle Encyclopedia.