Kimbra Lee Johnson (born 27 March 1990), known as Kimbra, is a New Zealand singer and actress who mixes pop with classic R&B, jazz and rock musical elements. Her musical influences range from Prince and Minnie Riperton, to Björk and Jeff Buckley. Her debut album, Vows, was released in Australia in 2011. A reworked version of the album was released in Europe and the United States in 2012. It featured several new songs.

Vincent Fantauzzo's portrait of Kimbra was a finalist for the 2012 Archibald Prize. The portrait was painted in conjunction with the making of a video featuring Kimbra's song "The Build Up".

Kimbra was featured on the 2012 multi-platinum single "Somebody That I Used to Know" by Gotye. On 10 February 2013, she and Gotye won the Record of the Year and Best Pop Duo/Group Performance awards at the 55th Annual Grammy Awards. This achievement made her the third New Zealand singer to win a Grammy Award. 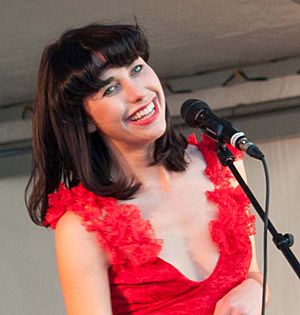 Kimbra Lee Johnson was in Hamilton, New Zealand. At the age of 10, Kimbra began writing songs. When she was 12, her father bought her a guitar and "after a few years of lessons, she was on stage, performing with her guitar tutors.

Kimbra attended Hillcrest High School, competing in the national schools' musical competition Rockquest for three years running, where she was awarded second place in 2004 at the age of 14. Kimbra made her first music video, "Smile", for the children's TV show What Now. Kimbra was a member of the Hillcrest High jazz choir.

All content from Kiddle encyclopedia articles (including the article images and facts) can be freely used under Attribution-ShareAlike license, unless stated otherwise. Cite this article:
Kimbra Facts for Kids. Kiddle Encyclopedia.