Prior to the release of Legend's debut album, he collaborated with already established artists. At various points in his career, Legend has sung in Magnetic Man's "Getting Nowhere", Kanye West's "Blame Game", on Slum Village's "Selfish", and Dilated Peoples' "This Way". Other collaborative appearances include Jay-Z's "Encore", backing vocals on Alicia Keys' 2003 song "You Don't Know My Name", and Fort Minor's "High Road". Legend played piano on Lauryn Hill's "Everything Is Everything".

For his solo work, he earned a Billboard Hot 100 number-one single with "All of Me" in 2013. He won the Academy Award for Best Original Song in 2015 for writing the song "Glory" from the film Selma. He has also won ten Grammy Awards and a Golden Globe Award. In 2007, Legend received the Hal David Starlight Award from the Songwriters Hall of Fame. In 2017, Legend received a Tony Award for co-producing Jitney for the Broadway stage. On Easter Sunday in 2018, Legend portrayed Jesus Christ in the NBC adaptation of the Andrew Lloyd Webber/Tim Rice rock opera Jesus Christ Superstar for which he received a Primetime Emmy Award nomination. 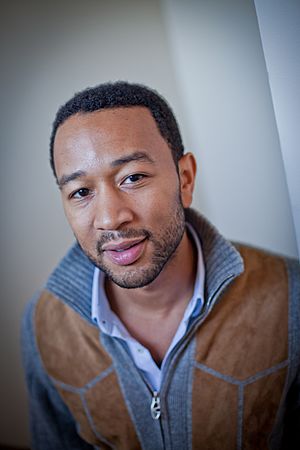 Legend was born on December 28, 1978, in Springfield, Ohio. He is one of four children of Phyllis Elaine Lloyd, a seamstress, and Ronald Lamar Stephens, a factory worker at International Harvester. Legend was homeschooled by his mother on and off throughout his childhood. At the age of four, he performed with his church choir. He began playing the piano at age seven. At the age of 12, Legend attended Springfield North High School, from which he graduated salutatorian of his class four years later. According to Legend, he was offered admission to Harvard University and scholarships to Georgetown University and Morehouse College. He attended the University of Pennsylvania, where he studied English with an emphasis on African-American literature.

While in college, Legend served as president and musical director of a co-ed jazz and pop a cappella group called Counterparts. His lead vocals on the group's recording of Joan Osborne's "One of Us" (written by Eric Bazilian of The Hooters) received critical acclaim, landing the song on the track list of the 1998 Best of Collegiate a Cappella compilation CD. Legend was also a member of the prestigious senior societies Sphinx Senior Society and Onyx Senior Honor Society while an undergraduate at Penn. While in college, Legend was introduced to Lauryn Hill by a friend. Hill hired him to play piano on "Everything Is Everything", a song from her album The Miseducation of Lauryn Hill. 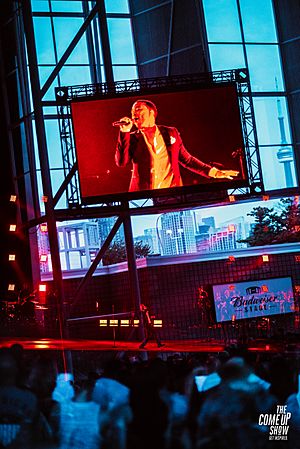 During this period, he began to hold a number of shows around Philadelphia, eventually expanding his audience base to New York, Boston, Atlanta, and Washington, D.C. He graduated from college in 1999, and thereafter began producing, writing, and recording his own music. He released two albums independently; his self-titled demo (2000) and Live at Jimmy's Uptown (2001), which he sold at his shows. After graduating from the University of Pennsylvania, Legend began working as a management consultant for the Boston Consulting Group. He subsequently began working on his demo and began sending his work to various record labels.

In 2001, Devo Springsteen introduced Legend to then up-and-coming hip-hop artist Kanye West; Legend was hired to sing during the hooks of West's music. After signing to West's label, he chose his stage name from an idea that was given to him by poet J. Ivy, due to what he perceived as an "old-school sound". J. Ivy stated, "I heard your music and it reminds me of that music from the old school. You sound like one of the legends. As a matter of fact, that's what I'm going to call you from now on! I'm going to call you John Legend." After J. Ivy continued to call him by the new name "John Legend," others quickly caught on, including Kanye West. Despite Legend's reluctance to change his stage name, he eventually announced his new artist name as John Legend. 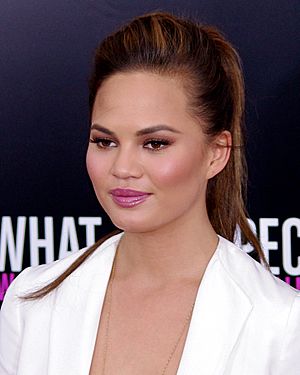 Legend met model Chrissy Teigen in 2007 when she starred in the music video for his song "Stereo." They became engaged in December 2011. They were married on September 14, 2013, in Como, Italy. The 2013 song "All of Me" was written and is dedicated to her; the music video was reportedly displayed at their wedding. On April 14, 2016, the couple's first daughter, Luna Simone Stephens, was born. On November 21, 2017, Teigen announced via Instagram that she was expecting the couple's second child, and announced on January 28, 2018, that their second child is a boy. Teigen and Legend's second child, Miles Theodore Stephens, was born on May 16, 2018.

All content from Kiddle encyclopedia articles (including the article images and facts) can be freely used under Attribution-ShareAlike license, unless stated otherwise. Cite this article:
John Legend Facts for Kids. Kiddle Encyclopedia.