The Radio Disney Music Awards (RDMA) is an annual awards show operated and governed by Radio Disney, an American radio network. Beginning in 2001, the show was originally broadcast only on Radio Disney, but later began being televised on Disney Channel from 2013 onwards.

With Radio Disney initially shutting down, it is unknown if the award ceremony will continue. 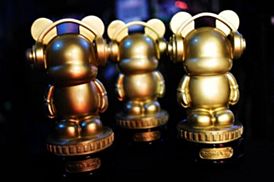 Impact Award is in recognition of an artist's influence on the world of entertainment and society, across generations of music enthusiasts.

Hero Award is an honor for contribution for the charitable work.

Icon Award is an honor for the music contribution and influence with the teenagers by long-time career artists.

Heroes for Change Award is an honor for young non-artists who make a difference in the world with charitable work.

Below are the current rankings for the most wins and most nominated artist among female and male:

All content from Kiddle encyclopedia articles (including the article images and facts) can be freely used under Attribution-ShareAlike license, unless stated otherwise. Cite this article:
Radio Disney Music Awards Facts for Kids. Kiddle Encyclopedia.