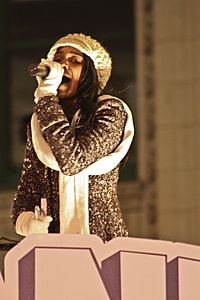 China Anne McClain (born August 25, 1998) is an American actress, singer, and songwriter. The first movie she acted in was The Gospel. It was released in 2005. Between 2006 and 2012 she played Jazmine Payne in Tyler Perry's House of Payne.

McClain first acted in the 2005 movie The Gospel. Tyler Perry saw the movie and gave her the role of Jazmine Payne in Tyler Perry's House of Payne. In 2009 McClain played Alana Collins in Hurricaine Season. In 2011 McClain won the prize for Best Performance - Comedy at the NAMIC Vision Awards for her role in the show. McClain started acting in the Disney sitcom A.N.T. Farm in 2011. She played the main character, Chyna Parks. The show lasted three seasons. McClain sung the show's theme song, "Exceptional". It was released on a soundtrack album called A.N.T. Farm in 2011. Two singles were released from the album. It reached number 29 in the American albums chart.

In 2014, McClain played Gabby Harrison in Disney Channel movie How to Build a Better Boy.

McClain was born in Atlanta to African American parents. Her father is Michael McClain, a music producer. Her mother, Shontell, a songwriter.

All content from Kiddle encyclopedia articles (including the article images and facts) can be freely used under Attribution-ShareAlike license, unless stated otherwise. Cite this article:
China Anne McClain Facts for Kids. Kiddle Encyclopedia.