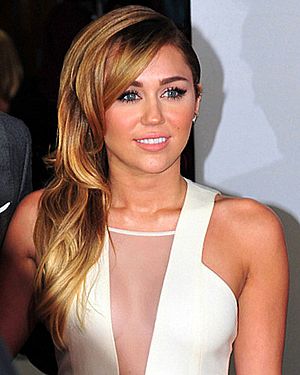 Miley Cyrus (pictured) served as the series' central focus during its four-season run.

Hannah Montana is a 2006 Disney Channel television series. The series stars Miley Cyrus as Miley Stewart. Miley is a normal girl who is also a pop star named Hannah Montana. No one except her family and two closest friends know Miley and Hannah Montana are the same person. Her father, Robby Ray Stewart, it is played by Miley Cyrus' real father, Billy Ray Cyrus. The series also stars Emily Osment as her best friend, Lilly Truscott, Mitchel Musso as Oliver Oken and Jason Earles as Miley's older brother, Jackson Stewart. In 2007 it was nominated for an Emmy award.

Hannah Montana & Miley Cyrus: Best of Both Worlds Concert is a musical movie from Walt Disney Pictures shown in Disney Digital 3D using 3D glasses. The movie was planned to only be in cinemas for one week, February 1-7, 2008 in the US and Canada, but the showings were extended. On its first weekend, February 1-3, 2008, the movie made $29 million. Ticket prices were as high as $15, at least 50% higher than most movie tickets in 2008.

Hannah Montana: The Movie is a 2009 Walt Disney Pictures musical comedy movie based on the Disney Channel show Hannah Montana which was released on April 10, 2009, by Walt Disney Pictures, it was the second Disney Channel series to have a movie for Walt Disney Pictures. The movie was directed by Peter Chelsom. Filming began in April 2008. Most of the filming was in Columbia, Tennessee and Los Angeles, California and was completed in July 2008. The movie stars Miley Cyrus, Emily Osment, Mitchel Musso, Jason Earles, Moises Arias, Lucas Till, and Billy Ray Cyrus. There are also some musical guests including Rascall Flatts and Grammy Winner Taylor Swift. The movie goes for 98 minutes (including credits).

(This DVD also included another episode from That's So Raven and another from The Suite Life of Zack and Cody. All three episodes were related and had crossovers amongst each other)

This DVD includes the first four episodes with Jake Ryan.

Volume 3: Life's What You Make It

Volume 4: One in a Million

All content from Kiddle encyclopedia articles (including the article images and facts) can be freely used under Attribution-ShareAlike license, unless stated otherwise. Cite this article:
Hannah Montana Facts for Kids. Kiddle Encyclopedia.