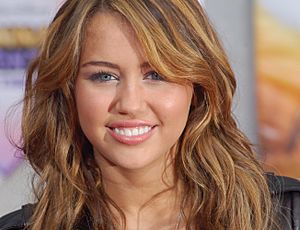 Miley Cyrus at the premiere for the film

Hannah Montana: The Movie is a 2009 American musical movie. It is based on the teen sitcom Hannah Montana. The film stars Miley Cyrus. It is about a girl named, Miley Stewart, that is living the secret life of Hannah Montana. It starts with that she makes a mistake and comes late to her best friends, Lily, birthday party, dressed as Hannah. All attention goes to her, and Lily gets disappointed. As Hannah tries to make it up for Lily, she gets an offer to fly to New York with her manager Vanessa Williams but Miley's father Billy Ray Cyrus has other plans. His mother's birthday is coming up in Tennessee and he his clear that Miley will go, too. She complains and complains, which leads to her thinking she can go to New York, but is fooled by her father who drives her and her brother to Tennessee.

When they get there, Miley is seeing things in a different way and when she meets Trevor, a sweet guy she has known from her younger age, everything changes. Not to mention, the crazy journalist that is stalking her for a story that is supposed to bring her down.

All content from Kiddle encyclopedia articles (including the article images and facts) can be freely used under Attribution-ShareAlike license, unless stated otherwise. Cite this article:
Hannah Montana: The Movie Facts for Kids. Kiddle Encyclopedia.