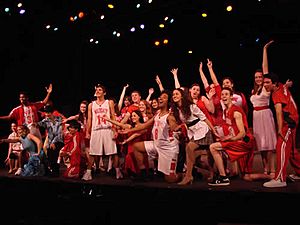 The story is set in New Mexico. It is about two high school students, Troy Bolton, who is captain of his school's basketball team, and Gabriella Montez, a shy new student who is good in mathematics and science. Together, they try out for the lead parts in their high school musical. Despite other students' attempts to foil their dreams, Troy and Gabriella persist and inspire others along the way. They also make new friends.

All content from Kiddle encyclopedia articles (including the article images and facts) can be freely used under Attribution-ShareAlike license, unless stated otherwise. Cite this article:
High School Musical Facts for Kids. Kiddle Encyclopedia.