Corbin Bleu Reivers (born February 21, 1989), known professionally as Corbin Bleu, is an American actor, model, dancer, film producer and singer-songwriter. He performed in the High School Musical film series. Songs from the films also charted worldwide, with the song "I Don't Dance" peaking inside the Top 10 of the Billboard Hot 100.

During this time, he also starred in the Disney Channel Original Movie Jump In! (2007). His first lead role was in the film Catch That Kid (2004). He has since appeared in the Discovery Kids drama series Flight 29 Down (2005–2007), as well as the film To Write Love on Her Arms (2015). He competed in the 17th season of Dancing with the Stars, partnered with professional dancer Karina Smirnoff.

He has also pursued a music career, and released his debut album Another Side on May 1, 2007, which included the single "Push It to the Limit." The album debuted at number thirty-six on the U.S. Billboard 200, selling 18,000 copies in its first week. Bleu released his second album, Speed of Light, on March 10, 2009. He returned to television, starring in the short-lived Ashton Kutcher-produced CW series, The Beautiful Life: TBL (2009), and the movie Free Style (2009).

In 2010, Bleu played Usnavi in the Broadway company of In the Heights. In 2012, he returned to Broadway in the revival of Godspell. In 2013, he was cast as Jeffrey King in the short-lived online revival of the daytime soap One Life to Live. In 2016, Bleu played Ted Hanover in the Broadway company of Holiday Inn, The New Irving Berlin Musical. He subsequently signed a recording contract with The Ghostlight Records to distribute his Holiday Inn soundtrack music, released in 2017.

He has contributed to many charities, including Starlight Children's Foundation, and Make-A-Wish Foundation, and served Thanksgiving dinner and Christmas Eve lunch at a Los Angeles homeless shelter in 2005 and 2008.

Bleu was born in Brooklyn, New York, the son of Martha (née Callari) and David Reivers (born 1958), an actor. His mother is Italian American and his father is Jamaican American. He has three sisters: Jag, Phoenix, and Hunter. As a child, Bleu studied dance for several years, focusing on ballet and jazz.

Bleu appeared in television commercials starting at the age of two, for products such as Life cereal, Bounty, Hasbro, and Nabisco. He began taking jazz and ballet classes, usually being the only boy in the class. By the age of four he was a model with the Ford Modeling Agency in New York. He appeared in print ads for stores such as Macy's, Gap, Target, and Toys R Us, and appeared in fashion spreads in Child, Parents, and American Baby magazines, as well as having his image on toys and game packaging. At age six Corbin appeared in his first professional theater production off Broadway, at The Town Hall. This three-concert series, created, written, and hosted by Scott Siegel, took place over one weekend and included a tribute to David Merrick. Corbin Bleu played an abandoned homeless mute in the play Tiny Tim is Dead.

Bleu graduated from Los Angeles County High School for the Arts. He trained in dancing at the Debbie Allen Dance Academy. He attended the Fiorello H. LaGuardia High School of Music & Art and Performing Arts in New York as a theater major, following in his mother's footsteps. Bleu presents an appealing combination of star quality and adolescent normality. He graduated from high school in 2007 and was admitted to Stanford University, but declined to matriculate because of scheduling commitments. As of 2007 he continued to live at home with his parents and three younger sisters. 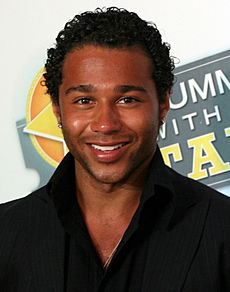 Bleu at the Summer with the Stars, Red Carpet in 2011

In December 2005, Bleu served Thanksgiving dinner and Christmas Eve lunch at a Los Angeles homeless shelter with Jennifer Love Hewitt. In 2008, Bleu's net worth was $5 million. In January 2009, Bleu had Wavefront Lasik Surgery with celebrity Lasik surgeon Dr. Rajesh Khanna. In 2013, his personal wealth equaled about $10 million. In 2016, Bleu's net worth was $4 million.

In 2011, Bleu was a frequent volunteer worker, working for charities such as Starlight Children's Foundation, the Make-A-Wish Foundation, and St. Jude Children's Research Hospital, and served Thanksgiving dinner and Christmas Eve lunch at a Los Angeles homeless shelter with Debby Ryan in 2008. Bleu has been a supporter of Do Something, hosting the sixth annual Do Something Awards in 2009. In May 2011, Bleu also attended the Do Something Awards kick-off event. He teamed up with Aimee Teegarden, Kevin Jonas and JoJo during the event to honor the thirteen nominees for the Do Something Award and to award $100,000 in recognition of their outstanding activism.

In 2011, Bleu began dating actress Sasha Clements, who he first met in a Toronto grocery store. On October 15, 2014, Bleu proposed to Clements in front of Cinderella's Castle at Orlando's Disney World with an engagement ring placed inside a glass slipper. They later appeared on TLC reality series Say Yes to the Dress, which documented the bride-to-be's search for the perfect wedding gown. They married in front of 160 guests at Hummingbird Nest in Santa Susana, California on July 23, 2016.

All content from Kiddle encyclopedia articles (including the article images and facts) can be freely used under Attribution-ShareAlike license, unless stated otherwise. Cite this article:
Corbin Bleu Facts for Kids. Kiddle Encyclopedia.