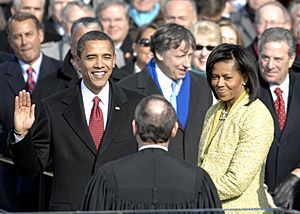 Barack Obama was inaugurated as the 44th President of the United States on Tuesday, January 20, 2009. This inauguration was the beginning of the first term of Obama as President and of Joe Biden as Vice President. The oath of office was given by Chief Justice John G. Roberts.

The ceremony was attended by more people than any event held in Washington, D.C. Based on the combined numbers of people there, people watching it on television and the Internet, it was one of the most-watched events ever by the global audience.

All content from Kiddle encyclopedia articles (including the article images and facts) can be freely used under Attribution-ShareAlike license, unless stated otherwise. Cite this article:
First inauguration of Barack Obama Facts for Kids. Kiddle Encyclopedia.