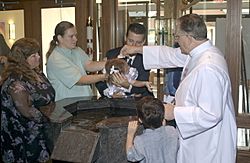 A godparent is an adult who sponsors a child during a formal religious ceremony or rite. Many religions have godparents or other adults who do something almost the same. These religions include Christianity & Judaism. Usually a godparent must be a member of the religion of the child. The role of a god parent is to also give the god child a gift, small or big, money, toys, etc. Mainly on Sundays.

All content from Kiddle encyclopedia articles (including the article images and facts) can be freely used under Attribution-ShareAlike license, unless stated otherwise. Cite this article:
Godparent Facts for Kids. Kiddle Encyclopedia.