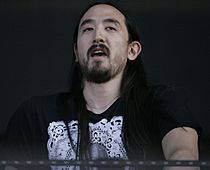 Aoki is known for his remixes of artists such as Kid Cudi. Aoki has released several Billboard-charting studio albums as well, such as Wonderland.

All content from Kiddle encyclopedia articles (including the article images and facts) can be freely used under Attribution-ShareAlike license, unless stated otherwise. Cite this article:
Steve Aoki Facts for Kids. Kiddle Encyclopedia.