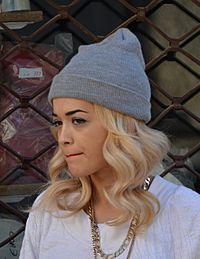 Ora in Pristina, Kosovo during the filming of the "Shine Ya Light" music video in September 2012

So far in the UK she became the first artist to appear on four top 10 singles in 2012.

Ora played Mia Grey in the 2015 movie Fifty Shades of Grey. In 2019, she will appear in the movie Pokémon: Detective Pikachu.

Rita Ora was born in 1990 in Prishtina, Kosovo to Albanian parents and moved to London in the same year. In 2004, she appeared in the British movie Spivs. She auditioned for Eurovision: Your Country Needs You on BBC One to be the British contestant for the 2009 Eurovision Song Contest. She later withdrew from the competition after a few episodes, as she did not feel ready. In 2009, Ora made a cameo on Jay-Z's video for "Young Forever" and "Over" by Drake. Ora caught the attention of Jay-Z and he signed her to Roc Nation, for which she was featured in a commercial for Roc Nation + Skullcandy Aviator Headphones. Ora dated Calvin Harris.

All content from Kiddle encyclopedia articles (including the article images and facts) can be freely used under Attribution-ShareAlike license, unless stated otherwise. Cite this article:
Rita Ora Facts for Kids. Kiddle Encyclopedia.