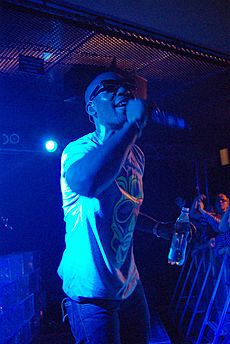 Patrick Chukwuemeka Okogwu (born 7 November 1988) is a British Grime MC and rapper. He was born in Plumstead, London and is of Nigerian origin. He is better known by his stage name Tinie Tempah. He also founded the record label Disturbing London in 2006.

Some of his more famous songs are "Pass Out", "Written in the Stars" and "Earthquake".

Tempah released his first album Disc-Overy in 2010. It went straight to number one in the UK Albums Chart. Seven singles were released from the album.

On 4 August 2013, the first single from Demonstration, "Trampoline", was released. 2 Chainz rapped in it. It reached number three in the UK Singles Chart. His second album Demonstration was released 4 November 2013. Twelve of the album's fifteen songs feature other musicians. Tempah is doing a UK tour for the album in 2014. Tempah won Best UK Hip Hop/Grime Act at the 2013 Music of Black Origin Awards.

All content from Kiddle encyclopedia articles (including the article images and facts) can be freely used under Attribution-ShareAlike license, unless stated otherwise. Cite this article:
Tinie Tempah Facts for Kids. Kiddle Encyclopedia.