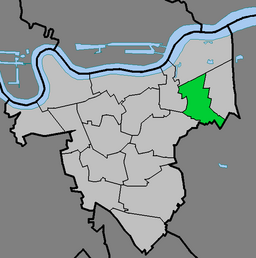 Plumstead is a district of south east London located in the Royal Borough of Greenwich. It is located east of Woolwich and south west of Thamesmead. Plumstead is a multicultural area with large Asian and Afro-Caribbean communities, in similarity to local areas such as Woolwich and Thamesmead. Plumstead is the location for a large bus garage built in 1981 on former industrial land and a substantial Church of England parish church dedicated to St Nicholas.

Much of the early history of Plumstead can be found in Edward Hasted's extensive history of Kent. In 960 King Edgar gave four plough lands, collectively called Plumstead, to a monastery - St Augustine's Abbey near Canterbury, Kent. These were subsequently taken from the monastery by Earl Godwin for his fourth son, Tostig.

King Edward the Confessor restored them again to the monastery on taking power, however Tostig saw the opportunity to take possession of them once again after Edward's death in 1066 when King Harold seized his brother's estates.

After the Battle of Hastings in 1066, William the Conqueror gifted Plumstead to his half-brother Odo, Bishop of Bayeux whom he also titled Earl of Kent. The Archbishop of Canterbury Lanfranc of Pavia and the Norman abbot of St Austin's successfully interceded to reclaim a portion of the land on behalf of the monastery. In 1074 Odo then granted by deed the remainder of the parish and also the right of the abbot to be "Chief Lord of the Fee".

However, the Domesday book of 1080 holds the details of Plumstead as two separate entries. Under the title of the land of the church of St. Augustine it reads

"In Litelai hundred. The abbot of St. Augustine has 1 manor, named Plumstede, which was taxed at 2 sulings and 1 yoke. The arable lands is ... In demesne there is 1 carucate and 17 villeins, with 6 cottagers, having 6 carucates, there is wood for the pannage of 5 hogs. In the time of king Edward the Confessor, and afterwards it was worth 10 pounds, now 12 pounds, and yet it pays 14 pounds and 8 shillings and 3 pence."

while under the general title of the Bishop of Baieux's lands

"The abbot of St. Augustine holds of the bishop of Baieux, Plumsted. It was taxed at 2 sulings and 1 yoke. The arable land is 5 carucates. In demesne there is 1 carucate and 17 villeins, with 3 boarderers, having 4 carucates. There is wood for the pannage of 5 hogs. In the time of king Edward the Confessor it was worth 10 pounds, when he received it 8 pounds, and now as much, and yet he who holds it pays 12 pounds. Brixi Cilt held it of king Edward."

Around this time Reginald, son of Gervase de Cornhill, released to the abbot and convent all claims in this manor from David and Robert de Cornhill who had rented it from them.

By 1273 Nicholas de Spina was elected abbot of the monastery and by the following year he was receiving eleven pounds from Plumstead residents.

Lora de Ros, lady of Horton, gave her right to two carucates of land and 50 acres (200,000 m2) of woods in Plumstead to the abbot, Thomas, in return for the rights of her and her heirs to partake of prayers performed in the church during 1287. It appears that Robert, the last abbot but one, had recovered a share of this land from her ancestor, Richard de Ros. It was found by a jury of grand assizes that his ancestors held this land in tenancy from the abbot and convent at a rent of twelve pound per annum.

In 1314, during the reign of Edward II of England, the abbot was summoned before Hervey de Stanton, the Chancellor of the Exchequer. He was asked to show by what right he claimed sundry liberties and free warren on the manor of Plumstead amongst others. Other questions included the right for a weekly market in Plumstead on a Wednesday and a fair yearly for three days "on the Eve day, and morrow of St. Nicholas".

For reasons that remain unclear, King Edward III exempted the men and tenants of the manor of Plumstead from providing four men from the borough for the sheriff as was the requirement elsewhere. A writ to Roger de Reynham, Sheriff of Kent in 1332 directed and commanded him that the residents of Plumstead should be allowed to send one man only. By 1363 Edward also decreed to the monastery in his charter of infpeximus that he released all manors and possessions given to it by former kings, including William the Conqueror. He also confirmed all the grants of liberties previously bestowed on the abbot and monastery.

By the time of Richard II of England the taxes from Plumstead were valued at 69 pounds, 10 shillings and sixpence, and Henry VI of England reconfirmed the liberties and rights of the monastery.

Plumstead manor, together with the church of Plumstead and the chapel of Wickham annexed to it remained part of the possessions of the monastery until its final dissolution in 1539, the 30th year of the reign of Henry VIII, when the abbey and all its revenues were surrendered into the King's hands by the then abbot, John Essex and its thirty members.

Plumstead expanded rapidly in the 1880s with housing developed for workers at the Royal Arsenal; two-up two-down terraced housing was common in the area close to the river and the Arsenal, whereas larger and smarter properties were developed uphill from the Thames, around Plumstead Common. In the late 19th century, Woolwich cemetery was developed in two phases (1856, 1855) on land formerly part of the southern edge of the Common.

Plumstead was also the home of the Peculiar People and a fascinating account of this Protestant sect is recorded in 'Unorthodox London' by the journalist Dr Davis. The Plymouth Brethren have had numerous meeting rooms in the area since about 1845. The present Brethren meeting places are at Plum Lane (1865), Willenhall Road (ca 1910) and Brewery Road (Richmond Gospel Hall). Quakers met nearby in Woolwich from 1905, and in their own Meeting House from 1924.

The nearest railway station is Plumstead railway station, located in the north-west corner of the town. It is on the North Kent line, and was opened in 1849.

When Crossrail is built the rail line will begin at Abbey Wood and drop below the surface at Plumstead, continuing north and west under Woolwich to begin its journey under the river Thames to the Isle of Dogs and the ExCeL exhibition centre and west into central London.

All content from Kiddle encyclopedia articles (including the article images and facts) can be freely used under Attribution-ShareAlike license, unless stated otherwise. Cite this article:
Plumstead Facts for Kids. Kiddle Encyclopedia.