Charlton is an area of south east London, England which forms part of the Royal Borough of Greenwich. It is located east of Greenwich and west of Woolwich. It is 7.2 miles (11.6 km) east-southeast of Charing Cross. 'Charlton next Woolwich' was an ancient parish in the county of Kent, which became part of the metropolitan area of London in 1855. It is home to Charlton Athletic F.C. and the location of Charlton House.

Charlton is recorded in the 1086 Domesday Book as Cerletone. It is formed from Old English 'ceorl' and 'tūn' and means 'farmstead of the freemen or peasants'. It is a common English placename and the parish was also known as Charlton next Woolwich to distinguish it from Charlton by Dover. During the 19th century the riverside portion of the area became known as New Charlton.

Charlton is assessed in the Domesday Book of 1086 at one "sulung", which is commonly held to have been the equivalent of two hides. In 1086 it was in the fee of Gundulf, bishop of Rochester, but in 1066 it had been held from the king as two estates, by two brothers, named Godwine and Alweard. Though assessed at only one sulung, it had a slightly higher value than might be expected, at £7, both in 1066 and in 1086. A church dedicated to St Luke is recorded in the village as early as 1077, although no trace of the medieval building survives.

In 1093, the manor of Charlton was given to Bermondsey Abbey by Bishop Robert Bloet of Lincoln. In 1268, the Abbey was granted a Monday market at Charlton, as well as an annual fair of three days, centred on Trinity Sunday, the eighth Sunday after Easter.

Between 1607 and 1612, Sir Adam Newton, tutor to Prince Henry, eldest son of James I, had a new manor house, Charlton House, built in the village. The Jacobean mansion by architect John Thorpe was never used by the prince, who died in 1612. On the northern edge of the house's garden is a mulberry tree planted in 1608 by order of King James in an effort to cultivate silkworms. On the death of Sir Adam, his executors Peter Newton and David Cunningham, 1st Baronet of Auchinhervie were charged to rebuild St Luke's Church.

The manor was subsequently acquired by the colonial administrator Sir William Langhorne, 1st Baronet, who is buried in the parish church. Upon his death without issue in 1715, his possessions in Charlton and Hampstead passed to the Conyers baronets, and subsequently to the Maryon-Wilson baronets.

In the early 18th century, Charlton was described by Daniel Defoe as:

a village famous, or rather infamous for the yearly collected rabble of mad-people, at Horn-Fair; the rudeness of which I cannot but think, is such as ought to be suppressed, and indeed in a civiliz'd well govern'd nation, it may well be said to be unsufferable. The mob indeed at that time take all kinds of liberties, and the women are especially impudent for that day; as if it was a day that justify'd the giving themselves a loose to all manner of indecency and immodesty, without any reproach, or without suffering the censure which such behaviour would deserve at another time. (from A Tour through Great Britain)

The Horn Fair (or Charlton Fair) was held regularly on 18 October each year, and retained its reputation for lawlessness; in 1833, for example, police arrested a swindler who had cheated several artillerymen. In 1857, following the abolition of nearby Greenwich Fair, Charlton Fair was described in the Morning Chronicle as "more like a carnival of the very worst and most vulgar class than any fair in the country." The Horn Fair was abolished, along with the livestock fairs of nearby Blackheath, by order of Henry Austin Bruce, the reforming Home Secretary.

In the early nineteenth century, Spencer Perceval, the only British Prime Minister to be assassinated, was buried at St Luke's church; Perceval's wife having been a member of the Maryon-Wilson family.

The flat land adjoining the Thames at Charlton Riverside has been a significant industrial area since Victorian times. The establishment of heavy industry centred on Charlton Pier, and led to a number of serious fires in the area in the mid 19th century. A notable establishment was the Siemens Brothers Telegraph Works opened in 1863, which manufactured two new transatlantic cables in the 1880s, and contributed to PLUTO in World War 2. It was in this industrialised area that Charlton Athletic F.C. was established in 1905, before moving a short distance to The Valley in 1919.

From 1903 to 1913, the Italian writer Italo Svevo lived in a house on Charlton Church Lane which now bears a blue plaque in his honour. He had arrived there in his capacity as a director in a Trieste firm selling high-quality underwater paint for ships, on whose behalf he established a factory in Charlton's Anchor and Hope Lane, fulfilling a big contract with the British Royal Navy.

The estates surrounding Charlton House were gradually broken up, and once the Maryon-Wilson family died out in 1925, the surviving open spaces were converted into public parks, two of which bear the family name. The house itself became the property of the local authority (currently the Royal Borough of Greenwich) and is used as a library and community centre.

The centre of Charlton, known as Charlton Village, lies on the edge of high ground about 7 miles east-south-east of central London, on the B210. West of the village the main road is called Charlton Road, and to the east, Charlton Park Road; the road itself is called 'The Village' in the village centre.

Charlton is also home to several parks of varying features, namely Maryon Park, Maryon Wilson Park, Hornfair Park, named in reference to the old Horn Fair, and Charlton Park, which is largely made up of sports pitches or playing fields. Adjoining Maryon Park is the Gilbert's Pit Site of Special Scientific Interest, which was formerly a major site of sand extraction. Most of the parks lie in the area once covered by Hanging Wood. 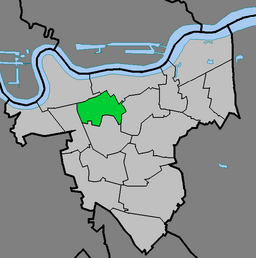 The architecture of Charlton is diverse, offering an insight into how different parts of the area were built up, as it evolved from a Thames-side village into the London suburb that it is today. Charlton gave its name to Charlton House, and has links with the classic architect Inigo Jones, a street being named after him. Other streets in Charlton named after prominent figures or places include Montcalm, Henry, Prince of Wales, Canberra, and Kashmir. There are four main pubs within the vicinity of Charlton Village, including The Bugle Horn, a late 17th century coaching inn. A major landmark on the north side of the village is The Valley stadium, home to Charlton Athletic F.C. since 1919.

New Charlton is the site of the southern end of the Thames Barrier, including the Barrier's main operational area and visitor centre. In 2013, a university technical college named Royal Greenwich UTC opened its campus nearby, under the auspices of the University of Greenwich.

The first recorded place of worship in Charlton is St Luke's Church, originally a chalk and flint building known to have existed in the 11th century. Rebuilt in the Jacobean style in 1630, it is now the parish church of a Church of England parish in the Modern Catholic tradition. The building was expanded with a new organ chamber and chancel in 1840, and new vestries in 1956. The church is listed as grade 2*, indicating a structure of 'more than special interest'. It is the burial place of several generations of the lords of the manor of Charlton, and of murdered British prime minister Spencer Perceval.

A second Anglican church, dedicated to St Thomas, and known as St Thomas Old Charlton, was built in 1848-50. Designed in the Romanesque style by architect Joseph Gwilt and his son John Sebastian Gwilt, it was consecrated on 31 July 1850. the building is grade II listed. A third Anglican church, dedicated to the Holy Trinity, was built in New Charlton in 1894, designed by John Rowland. It was listed in 1973, but was declared redundant in 1974 and demolished in 1975 to be replaced by a block of flats.

The Roman Catholic church of Our Lady of Grace was established by the Assumptionists Order. They settled in Charlton in 1903 after being expelled from France in 1900 due to suppression of Holy Orders. The first nuns moved into Highcombe and set up a mission in Charlton. The current church was built in 1905 and celebrated its centenary on 17 September 2005 with a concelebrated ecumenical mass, led by Archbishop Kevin McDonald and parish priest, Fr. Michael Leach.

Other churches in the area include Charlton Tabernacle of the New Testament Church of God on Charlton Church Lane;

The nearest station is North Greenwich on the Jubilee line.

Charlton is located between the A206 to the north and the A207 to the south. The southern approach of the Blackwall Tunnel crossing of the River Thames is located to the west, while the South Circular Road lies some way to the east.

All content from Kiddle encyclopedia articles (including the article images and facts) can be freely used under Attribution-ShareAlike license, unless stated otherwise. Cite this article:
Charlton, London Facts for Kids. Kiddle Encyclopedia.