Kidbrooke is an area of South East London, England, in the Royal Borough of Greenwich 7 1⁄2 miles (12 km) south-east of Charing Cross and north west of Eltham.

The district takes its name from the Kyd Brook, a watercourse which runs from Orpington to Lewisham, by which point it is part of the River Quaggy. It is a tributary to the River Ravensbourne. 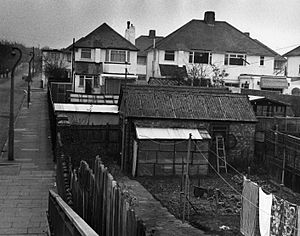 Houses and gardens in Kidbrooke, January 1980

Immediately south of the former Ferrier Estate is Sutcliffe park which includes a lake, acting as a flood defence, and created by partly releasing the Kyd Brook from concrete conduits underground in which it had run until 2006.

Rochester Way, a road which was built along much of the course of the old country lane Kidbrooke Lane, was intended as a bypass for Shooters Hill to the north. Rochester Way has itself now been bypassed by a dual carriageway – part of the A2 road – built in the 1980s over most of Kidbrooke Green. A small remaining piece of this open land, alongside the road, is now Kidbrooke Green Park, and adjacent to that, a small nature reserve managed by Greenwich Council. The nature reserve is visible, but not open to the public.

Some of the land encroached on by the dual carriageway, adjacent to the railway line serving Kidbrooke railway station, was formerly a Royal Air Force equipment store. Some of the buildings remain, beyond the houses of Nelson Mandela Way, but the site is now little used. The nearby Thomas Tallis School is built on the former site of an RAF aerodrome, formerly a barrage balloon centre. (There are several other military facilities in the general vicinity, which is also close to a surviving base in Woolwich, long home to the Royal Artillery and now to other parts of the British Army.)

Kidbrooke is served by London Buses routes 132, 178, 286, 335, 386 and B16. These connect it with areas including Bexleyheath, Blackheath, Eltham, Greenwich, Lewisham, North Greenwich, Sidcup, Welling and Woolwich.

The A2 road gives the area rapid access to the London Inner Ring Road, the South Circular Road and the M25 motorway.

All content from Kiddle encyclopedia articles (including the article images and facts) can be freely used under Attribution-ShareAlike license, unless stated otherwise. Cite this article:
Kidbrooke Facts for Kids. Kiddle Encyclopedia.